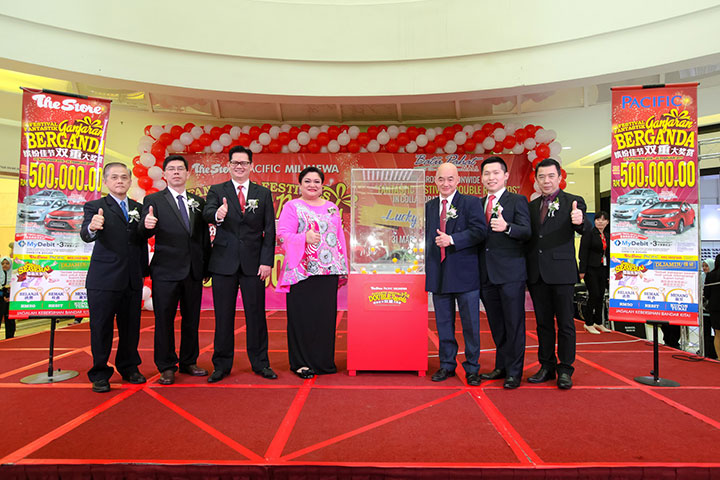 “Fantastic Festivals Double Rewards” contest was held from 25 November 2016 till 26 February 2017 in conjunction with Christmas & Chinese New Year celebrations. With every purchase of RM50 and above in a single receipt on the same day at any The Store or Pacific outlets, customer is entitled to get 1 Entry, or RM30.00 at Milimewa outlets.

In collaboration with MyClear (Malaysian Electronic Clearing Corporation Sdn. Bhd.), customer who make payment via MyDebit ATM / Debit cards is entitled for 3 entries, stand 3x higher chance to win the below attractive prizes. Lastly, the 3 finalist winners were confirmed to drive home one of the brand new car. The prizes for each winner shall be determined during the prize presentation ceremony.

The 3 finalist winners were selected as below:-

The prize for each finalist shall be determined during the Prize Presentation Ceremony which will be informed later. Meanwhile, a total cash coupon worth RM370,000 also had been given away during the contest period. Customer who spends RM50 in a single receipt at any The Store or Pacific outlets will stands a chance to win a instant cash coupon up to RM100 in “Instant Rewards”. The winning cash coupon amount will be appeared at the bottom part of the receipt.

The response of “Fantastic Festivals Double Rewards” contest was simply overwhelming as it saw an entry of more than 1 million Entry forms from all over Malaysia within the 3-month plus period. The Store Group would like to take this opportunity to thank all customers who had participated in this contest.

On the same event, The Store Group celebrate shoppers bundles of joy through the “Cute Baby 2017” photogenic contest with a total prizes worth of RM50,000.00 . From now until 31 May 2017, parents can share their adorable babies’ photo and stand a chance to win the prizes worth RM50,000. To participate, buy RM30 worth of products in selected brands product in a single receipt and stand a chance to win one of the fabulous prizes as below:

The Store Group vows to continue to serve and reward its loyal customers by organizing more exciting contests and promotions as well as extend its best services to all customers as a gesture of appreciation for their unceasing support over the years. The Store Group will ensure that customers will be able to continuously enjoy value-added benefits whenever they shop at The Store Group outlets throughout Malaysia.